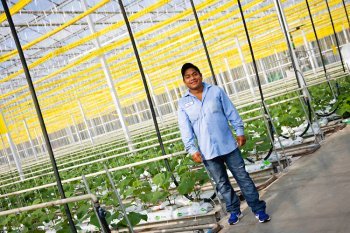 Migrant worker programs a win-win for workers and farmers

Jorge Mario Lopez is like most fathers. He is focused on his family and committed to doing all that he can to provide for his wife, two daughters and three sons. The Guatemalan is also one of more than 40,000 migrant workers who come to Canada legally every year to work on farms.

“For our family, the main reason for me to come here was because my son, now age 15, had been born with special needs. It was a very big expense and I could no longer cover the expenses for his medical exams and needs,” Lopez says.

It’s his job in a pepper greenhouse at Nature Fresh Farms in Leamington that ensures his son’s ongoing medical care and a better life for the entire family.

Fellow Guatemalan Julio Polanco also works at Nature Fresh Farms, and although leaving his family is difficult, he’s proud that his job in Canada has meant his wife could go to school to become a nurse and that his daughter is now getting a good education.

“Here, I have achieved many goals that I have always wanted and I’m proud of my wife, of myself and of my daughter,” Polanco says. “In a short time, you can accomplish a lot of things, and then you think that it is worth the sacrifice to leave the family for a bit and that they will have a better future.”

It’s not just the workers who value being able to come to Canada to earn money to support their families. Farmers, too, count on their international workers – who come to Canada under the umbrella of programs like the Seasonal Agricultural Worker Program (SAWP) or the agricultural stream of the Temporary Foreign Worker Program (TFWP) – to keep homegrown produce on Canadian store shelves.

Unlike many types of farming, fruit and vegetable production is very labour-intensive. That’s because many crops bruise or damage easily, so they need to be planted, harvested and cared for by hand. Fruits and vegetables also have very specific and short planting or harvesting seasons, so often a lot of work has to be done very quickly.

When travel restrictions early on in the pandemic put a temporary halt to international worker arrivals, it created some tense weeks for growers and others in the Canadian produce industry until the issue was resolved.

COVID-19 has highlighted the importance of countries being self-sufficient in everything from manufacturing to food production, and although Canada’s climate means not all foods can be grown at home, food security is a top-of-mind-issue.

“Quite simply, without international workers, we wouldn’t be able to grow many of the fruits and vegetables that Canadians love,” says Niagara grape grower Bill George. “They are critically important to our ability as a country to feed Canadians and ensure we have as much locally grown produce on our shelves as possible.”

The labour crunch in horticulture is not new, however. In fact, the Seasonal Agricultural Worker Program began in Canada 55 years ago when 264 Jamaican workers arrived in Ontario to help with apple harvest in 1966. Today, the government-approved program is open to workers from Mexico, Jamaica, Trinidad & Tobago, Barbados and the Eastern Caribbean Islands, and many more workers from other countries come to Canada through the Temporary Foreign Worker Program’s agriculture stream.

They have the same rights and privileges as Canadian workers, and their employers have the same obligation to their international workers as they do for their Canadian employees. According to Foreign Agricultural Resource Management Services, which helps administer SAWP in Ontario, that includes minimum wage, health care, workplace insurance coverage and access to Employment Insurance.

Like Lopez and Polanco, the money workers earn in Canada supports their families and communities in their home countries. And many have been working on Canadian farms for decades, like María Gonzales, who first started coming to Canada from Mexico 20 years ago this year. She was one of the first female migrant farm workers in Canada and has been working at the same Ontario greenhouse since 2012.

“It was very difficult at first because 20 years ago, this program wasn’t intended for women, only men, and when we were accepted, it was a triumph because only two or three of us were accepted,” Gonzales says. “It’s so hard to get into this program. My family is proud that I am here and because I’m here, their lives are more stable in Mexico.”