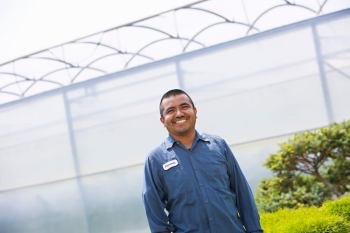 Canada is welcoming and offers opportunities for a better life, say migrant workers

Since 2015, Fernando Nieto Rodrigues has been leaving his wife and three children in Mexico every year to work on Canadian fruit and vegetable farms. For the past four years, he’s been at a vegetable greenhouse near Windsor, and although he misses his family, he’s proud that he’s able to provide them with a better life.

Thanks to his job in Ontario, for example, his oldest daughter is going to university – an opportunity Fernando himself never had. He’s also proud of the role he plays in feeding Canadians and appreciates the strong relationship with his employer, DC Farms.

“We do our work with pride, with care, and we come here to do things right. We are not just workers; we are people who come to give our best to this country, to help our economy, and help Canada’s economy,” he says. “This is also a family farm. We are not just a worker or only an employee. We are family. They look after us and they take care of us.”

Fernando is one of 17,000 migrant workers who come to Ontario annually from Mexico, Jamaica, Trinidad & Tobago, Barbados, and the Eastern Caribbean through the federal Seasonal Agricultural Worker Program (SAWP). Additional workers come from other countries as participants in the agricultural stream of the Temporary Foreign Worker Program (TFWP); all of them are essential to keeping homegrown produce on Canadian store shelves.

Migrant farm workers have been coming to Ontario since the 1960s, when farmers first began struggling to find enough local employees to help them grow and harvest crops. Growing fruits and vegetables is very labour-intensive because many of the delicate crops need to be planted, harvested and cared for by hand. Fruits and vegetables also generally have very short planting or harvesting seasons, which means, for example, that crops can spoil in the field or on the vine if they’re not harvested at just the right time.

But it wasn’t until the COVID-19 pandemic and travel restrictions that put a temporary halt on international worker arrivals that more Ontarians started to become aware of just how dependent fruit and vegetable production in this province is on these seasonal workers.

Tragedy and sensation grab headlines, but the real stories of workers like Fernando, why they leave their families, and how they feel about Canada and Canadians are not often told.

Fellow Mexican Jaime Madrid has been working on a vegetable farm near Bradford for years. So far, he’s finished building his house and is paying for his two oldest children to go to college. Being away from his family is tough and he’s not a fan of winter, but Canada has made him feel welcome, he says.

“What I like most about Canada is its people. They are honest people; I see a lot of human warmth in them. When people in Canada smile at you, it is a sincere smile; you can see the affection in their eyes,” he explains. “I would say the weather is a bit drastic for us, but you learn to like the winter. Above all it is the people, the warmth you feel here. You feel at home.”

As soon as they arrive in Canada, workers on the government-approved programs have the same rights and privileges as Canadian workers, and their employers have the same obligations towards them as they do for their local employees. That includes following government regulations about minimum wage and other employment standards, as well as access to health care, workplace insurance coverage and Employment Insurance. And worker housing is inspected by local public health units to make sure regulations are met.

For the last five of his nine seasons in Canada so far, Jamaican Nicholas James has been working for EZ Grow Farms, a strawberry plant grower in Norfolk County. Like many Canadians, he’s become a fan of the Toronto Raptors, even following them when he’s back home in Jamaica. He also enjoys playing soccer, especially on the soccer field his employer set up for his workers.

“I never knew anything about strawberries before, so since I started here, I’ve learned a lot,” he says. “I also think – no, I know – that I’m working for one of the best families in the program. I’m lucky to be working here. I love them and I know they love us. I love coming here and working in Canada.”